What Is The Cost of Living In Chicago? 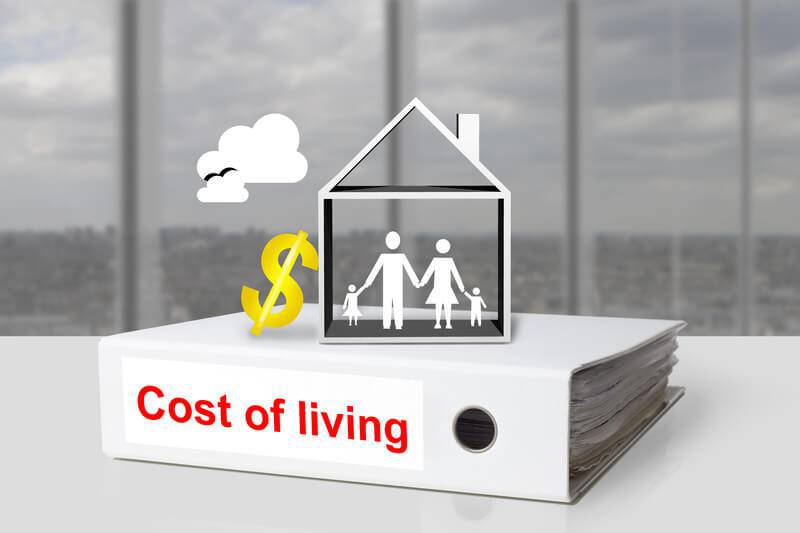 There are many side attractions in Chicago, and the weather is a bit lower than in the hot summer. You can easily fall in love with Chicago with its beautiful landscape and towering skyscrapers; however, there is more to moving to Chicago than just driving your way there.

If you plan to move to Chicago anyway, you need to understand the exact cost of living in the city. One of the major things you need to discover before making a move to a new place is the cost of living in your destination location. The cost of living simply means how much money will be required for a particular lifestyle in a specific place. This helpful guide will assist you in finding all the necessary information you need.

Although Chicago and New York may be on the same level when it comes to architectural splendor, rent prices in Chicago are reasonably lower. And that is an advantage for the total cost of living in Windy City. According to March 2019 data shown by Apartment List, the average cost to rent an apartment in Chicago is $927 for a studio apartment, and a 1-bedroom goes for $1,076.

If you are renting a 2-bedroom, then expect to pay about $1,265, while a 3-bedroom in Chicago goes for $1,618. These are just estimated costs but lower than the prices in Los Angeles, New York, San Francisco, and many other big cities.

Although most people moving to Chicago are planning to rent, some are actually planning to buy. Although real estate prices in Chicago were hit by the financial crisis, the market has bounced back from it in the past few years. The real estate market as of 2018 has seen great development towards price averages similar to before the crisis. Now, you can prepare to pay about $380,000 for a 4-bedroom home.

The average for a 3-bedroom home is at $225,000; the 2-bedroom property goes for $200,000, which brings the overall average price of a property purchase to $268,000. Chicago is generally a market for renters. Although there is tough competition, there are many great deals to negotiate. You can start now whether you are a potential Chicago renter or Homeowner.

People living in Chicago without owning a personal car can rely on both bus and subway services. An unlimited pass from Chicago Transit Authority is available for $105 per month. That is about $5 higher than the similar pass in L.A, but about $17 lower to the same in New York. You will be required to pay for one of the City Vehicle Stickers in Chicago if you feel you cannot go around without a car.

This yearly payment is to make sure you comply with the Wheel Tax of the city. The sticker will cost about $87.82 for an average passenger car. Be ready to pay $139.48 if you own an SUV or a medium-sized van. You can take to the road immediately after you’ve paid for your vehicle sticker.

However, you need to consider fuel prices. Data from GasBuddy from May 2019 report the cost per gallon for gas in Chicago to be $3.23. That is about $0.35 more than the national average, which is at $2.89.

Average Cost of Utilities in Chicago

Utilities are essential regardless of your status as a homeowner or renter in Chicago. Expatica report that it will cost 2 people living in an 85sqm about $190 per month for utilities. A single person living in a 45sqm studio Apartment can expect to pay about $110 monthly for utilities. This implies that the average monthly cost of the utility for a single person living in a 45sqm apartment is about $155. This cost covers basic utilities such as the internet, garbage, heating, electricity, and water.

Food and Groceries in Chicago

Alongside the meals tax we’ve mentioned earlier, the sales tax on groceries in Chicago is at 2.25% additional sales tax. This is not common but reasonable in a city with already high sales tax. In particular, the Illinois state tax at 6.25%, with the state and local surtaxes, which brings the standard sales tax in Chicago to 10.25%.

The second-largest property taxes in the United States are held by Illinois. The effective property tax rate in the state is at 2.32%, which almost doubles the national average. However, Chicago doesn’t charge exorbitantly on income tax and is at 4.95%

The average net salary per month after tax deduction in Chicago is about $3,800. You should prepare to spend about 85% of your salary on the monthly rent. You will spend 4.3% on utilities, and 28.6% will go on food and groceries. Your transportation will cost about 8.8% of your salary. The average cost of living in Chicago for a single person without paying rent is $980, while a four-person family should expect to spend about $3,500 excluding rent.

This implies that a single person earning an average salary living in a 45sq rental studio apartment should prepare to pay $3,042 monthly. This takes rent prices in Chicago down the ladder, with 46% lesser than NYC. Prices for groceries in Chicago are about 26% lower than in NYC. While consumer prices with rent are about 33% lower compared to that of New York.

If you are looking for entertainment that won’t hurt your budget, try bowling, which costs an average of $8 for each game, and an average of $13 for movie tickets. For those who love larger entertainment, you will spend about $113 to bran a ticket to a Major League Baseball game for Cubs and $96 for White Sox. An adult should expect to pay a monthly membership fee of $53 for fitness.

Facts on Miscellaneous Cost of Living in Chicago

There are numerous free attractions to enjoy. You can walk on the shore of Lake Michigan, pay a visit to the Lincoln Park Zoo, or go for a picnic in Millennium Park. Once you feel exhausted, you can take a look at the University of Chicago’s campus or just walk through Wicker Park. Just be sure to go there in a warm coat during winter. Even though Chicago is nicknamed the Windy City, it, however, doesn’t have anything to do with its weather as it is generally a windy place.

Ready to move to Chicago?

Moving to a new city can significantly affect your finances, especially if you purchase a new home. You may need to consult a financial advisor for assistance. You don’t have to do much work before you find a financial advisor that meets your needs.

Most importantly, you will need to plan for your move. Contact reputable Chicago movers.

Is Chicago’s cost of living high?

The cost of living in Chicago, Illinois, is more than the national average, with 23%, but better than hundreds of cities of the US. Any place can see its cost of living vary based on such factors as your career and its average salary, as well as the situation of the place's real estate market.

What is the monthly cost of living in Chicago?

The average cost of living in Chicago for a single person without paying rent is $980, while a four-person family should expect to spend about $3,500 excluding rent. This implies that a single person earning an average salary living in a 45sq rental studio apartment should prepare to pay $3,042 monthly.

Which is the bad side of Chicago?

A certain data shows that Chicago's bad neighborhoods would be the Near West Side, Lake View, Near North Side, the Loop, Logan Square, West Town, Austin, North Lawndale, Humboldt Park, and South Shore.

What state in the country has the lowest median rent?

Mississippi has the cheapest cost of living among all fifty states. Its ratio of cost of living is 86:1. Its housing cost is also the lowest in the country and is at an average of $128,000, while the average cost of renting a 2-bedroom apartment in Mississippi is $746 per month.

We are sure you now know all the cost of living in Chicago. You also need to remember that prices and stats can change. What you find to be correct today may not be accurate next year. You get to live in one of the most bubbling and attractive cities in the United States when you rent an apartment in Chicago. It is indeed a windy city but has little or nothing to do with the city’s weather. Everything you need to expect has been revealed to you so you can proceed to check long distance moving companies.