Total of 4 movers in Alabama
Alabama's mover of the month:
InstaMovers
Birmingham 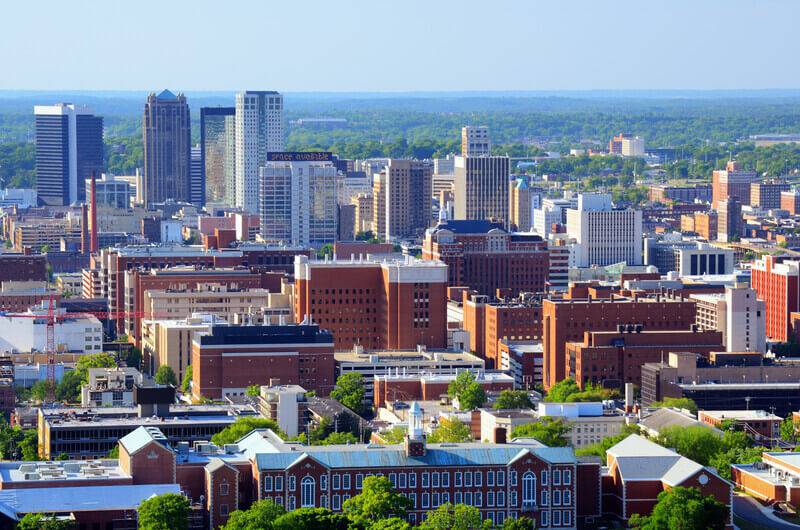 Congratulations on moving! When you use iMoving, it doesn’t matter if you need long-distance moving companies or local movers for your upcoming Alabama move, what we care about is that everything gets to your new location in one piece with as little hassle and stress as possible.

Moves are undeniably stressful. Some of the reasons why include low-quality moving companies and last minute planning. Instead of going through one of the most stressful situations people, and families face, let iMoving help make your upcoming Alabama move a memory that puts a smile on your face – or at least that doesn’t cause you a headache.

Instead of spending your time researching Alabama moving companies and contacting them one by one, iMoving provides you with a network of movers that have been comprehensively vetted and found to be good enough to work with our company, and we don’t put our name next to just any company. Anyone moving company you book through us cares about your well-being and your belongings as if they were their own.

No matter if you’re looking for a long-distance moving company or an Alabama mover to help you move within the state, you’ll find that iMoving has a selection of expert, experienced movers who are dedicated to safe and efficient moves and most importantly (in our opinion), dedicated to customer service.

If that’s not enough, our quotes are accurate and you can be assured that you are getting one of the best prices around because our companies compete for your business.

Moving Services You Can Find in Alabama

Tips for a Smooth Move

If you want to have the least amount of stress possible, here are a few ways you can make your Alabama move a bit easier on you and your family.

It’s easy to think you have time, but like everything else in life, a move can sneak up on you. When the decision is made to move, set a budget that same week and start prepping. iMoving offers a quick quote tool that gives you a good indication of how much your move is going to cost. When you’re ready to lock in a company, try using our Precise Quote tool for a very accurate assessment of how much you’ll need to save up.

When you start packing your things, it will be much easier to unpack, not to mention find essential items on that first day or week you are in your new location. By labeling your boxes, you will quickly be able to find the items you’re looking for and can put boxes in the rooms they belong, without unpacking them until you’re ready.

3. Communicate with your moving company

This is often overlooked by many people who are moving, but honest, open communication with your Alabama moving company is key. If there are sudden changes you need to make, you won’t feel as if you cannot make the request. When you have a question about a charge after the move or before, an open line of communication makes the move, especially on the day they have all of your things much easier.

4. Pack non-essential items ahead of time

Packing is really exhausting – mentally and physically. To avoid getting worn down, pack up items you know you don’t need immediately, like seasonal clothes, small appliances, kitchenware and furniture that you can absolutely go without. This means you’ll have only the essentials to pack up, which may be much less than you may think.

Things to Know About Alabama

No matter how you make it to Alabama, make sure you choose a moving company that deeply cares about getting you there safely.

Sorting out the details around local moving needs is not always straightforward. More often than not, you’re looking at a lot of information about what is necessary and how you want to accomplish everything. How can you be sure that you have solutions that are going to be helpful? Are there ways to know that you can move forward?

As you explore your options for local moving companies, you want to be certain that you take the time to really check things out and see what will be best in the long run. Here’s our guide to sorting out exactly who can take care of your local move in an effective manner.

Why Find a Company That Only Offers Local Moves?

During your search for professional movers, you will notice that there are a lot of different options available for you to choose from. But, moving costs can end up being quite a bit of cash, and you want to be sure that you’re doing whatever you can to reduce those costs effectively.

If you want to save money, you can work with a company that only offers local moves. More often than not, they will also have more flexible schedules and make it simpler for you to take care of everything related to your move. You can ensure that you’re working with local persons that you can trust and you can feel good about hiring.

What Services Do They Offer?

The services that these companies offer is going to be at the top of the list of things that you want to be sure to look at. More often than not, you will notice that many local companies are going to offer as many services as possible, mainly because they want to offer the best value to all their customers.

Here’s a quick look at some of the services you may be looking at.

Do They Have a Good Reputation?

When you’re looking at a local moving company, you want to be sure that you ask your friends, family, and neighbors about them as well. If they’re good local movers, then the people you know are likely to have heard of them. On top of that, they may be able to give you some more ideas about who it is that you should look at and what companies that you may want to go ahead and avoid.

You can also contact your local Better Business Bureau or Chamber of Commerce to see what sort of rating that they have within the community. If there isn’t any info on them, or you have a hard time getting exactly what info you need, you may want to see if there are other moving companies that you’d want to go ahead and connect with.

What Info Is Available Online?

The internet is filled with all sorts of information about moving companies, and you will notice that there are a lot of ways in which you can go learn about the potential moving experience with every single one of them. You want to be sure that you compare information on multiple sites and read all sorts of reviews. It will allow you to get the best “big picture” view of what’s going on.

Not only that, but more often than not, you can get onto websites so that you can get moving quotes. Nowadays, most moving companies understand that they need to be online in order to ensure that they get the best results for their efforts in marketing.

With these quote tools, you can typically just put the information in regarding your move and make sure that you have it all ready to go. They will then give you a number that’s a relative quote. You can also, at that point, request an in-person quote so that you can get the most accurate quote and can budget appropriately.

On top of all of that, you can also learn a bit about what types of moves that they offer. So, even if you’re specifically looking for local moving companies, you can typically sort out that type of information while you’re looking on their websites and at the things that you may want to get your hands on.

How Much Should You Expect to Pay for a Local Move?

The cost of home moving can vary based on a lot of details. Local moves are typically sorted out by how many movers you are going to need, and how many hours they believe your move will take. That being said, you can typically talk to the company in question and get a free quote before locking anything in.

Local moves typically cost up to $700, depending on how many rooms your current home has and what time of the month or year that you’re looking to move. You have a lot of areas where you could save some money, including when you hire people, how you want to get things done, and how much you’re moving. Look into the options you have and sort out details that can help you to stay ahead of problems.

These companies are going to specialize in interstate moving, allowing them to take care of anything and everything that may come up with long-distance moves. They understand the logistics, have the appropriate licenses, can work out more complex details, and can get the job quickly and effectively.

There are some differences between American moving and moving to other countries. You’ll want to work with parts of the moving industry that have the tools and technologies which allow them to ship, sail, and freight items across international lines. They are much different than local moves, and many local movers don’t have the infrastructure to take care of things in this regard.

While local moves definitely do not take as long as other types of moves, you still want to be certain that you take off a reasonable amount of time so that you can settle in. Typically, you want to take 1-2 days off both before and after moving day so you can get things done properly and not be stressed out.

Researching your options so that you can find the right moving company can save you a lot of stress and headache if you do it right. You can sort out the details and ensure that you’ve scheduled the right movers for your needs when all is said and done.