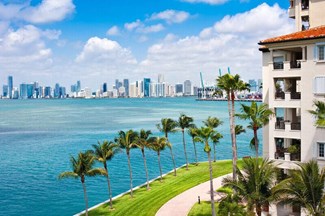 Founded in 2016, iMoving is a professional moving company directory trusted by Americans for finding the top movers. We are experts in the moving and relocation industry, with experience since 1999.

The iMoving directory grants you instant access to handpicked, licensed, and fully insured movers. Our platform helps you find local moving companies in the contiguous USA catering to your requirements.

iMoving is an online moving directory of the top-rated moving companies in and around your area. Check our listings, go through company profiles, read reviews and recommendations, compare moving quotes, select a mover, and book online. The moving unit serving Miami, Florida will arrive at your specified location on the chosen date and time.

Miami, Florida is a metropolis located in Miami-Dade County, Florida. Miami FL is officially known as the ‘City of Miami’. Miami is situated in southeastern Florida and contains the third tallest skyline in the US (behind New York City and Chicago).

Miami got its name from the Mayaimi Native American tribe and was incorporated in 1896. Present-day Miami is a center of commerce, art and culture, and international trade, consistently ranking on lists of top 10 US cities in terms of human capital, culture, business activity, political activity, and information exchange. The city is also a significant tourism hub that ranks second in the country after New York City.

Miami is an economic powerhouse and is also referred to as Latin America's business capital due to the high concentration of Cuban-Americans. It is also called the ‘Cruise Capital of the World’ as PortMiami (the port of the city) is one of the busiest cruise ports on Earth.

Some world-famous US and international banks like Bank of America, Regions Bank, and Chase are located in Miami. The city is also the home of many Fortune 500 Companies such as World Fuel Services, Lennar, and Ryder System. The National Hurricane Center of the US government is also located here.

Miami is one of the cleanest cities in America, having won accolades for its environmental policies. The Health District of Miami is the primary center for clinics, hospitals, and biotechnology centers. The medical research industry is booming here.

Miami, Florida in Miami-Dade County is the largest city in the Miami metropolitan area (Greater Miami Area). Miami is the second-largest city in Florida, behind Jacksonville. The city is located at the mouth of the Miami River and bordered by Biscayne Bay and the Atlantic Ocean to its right and the Florida Everglades on its left.

Being a large city, Miami has many neighborhoods:

Should you require any moving services in the Miami, Florida area, contact any of the trustworthy transport companies serving Miami to help you move.

Miami, Florida is a popular city for travelers and has many roads and pathways connecting it to other big cities. There are several major highways in South Florida. One of the major highways in Miami is Interstate 95 (I-95), which runs from Maine to Miami. The Airport Expressway (SR 112) will take you to or from the airport.

Other routes include the Dolphin Expressway (SR 836), Florida’s Turnpike Homestead Extension (SR 821), Don Shula Expressway (SR 874), and Snapper Creek Expressway (SR 878). Driving on these roads may help shave time off your journey, but do note that some of these highways may require you to use the SunPass electronic toll collection system.

Miami uses a grid system for its streets, dividing them into quadrants comprising Northeast, Northwest, Southeast, and Southwest. Streets in Miami usually run from east to west, while courts, roads, avenues, and places usually run from north to south.

Miami, Florida has numerous transit stations for all means of transportation. Miami International Airport (MIA) is the busiest airport in Florida. Ships and cargo use PortMiami to move goods and services.

Miami-Dade transit operates the trains and metro buses in the city. The Miami Intermodal Center is one of the top transportation hubs in the city. Miami's Metrorail system is a 25-mile dual track that offers services from the airport to the downtown Miami and Jackson Memorial Hospital area. Overall, the Metrorail covers almost the entire Miami metropolitan area.

Places of Interest in Miami FL

Places of interest in Miami include several luxury hotels located near Miami Beach and Downtown Miami. Some of them are the Mandarin Oriental, Four Seasons Hotel, SLS Brickell Miami, JW Marriott Miami, and Novotel Miami Brickell.

There is no shortage of bars and restaurants in Miami. Make sure you have the following on your bucket list:

Miami Beach and South Beach are two of the most popular tourist spots in not just Miami, but South Florida. You should also explore the following attractions during your Miami visit:

Miami has a lot of notable monuments. According to us, Freedom Tower, Cape Florida Lighthouse, and Joe's Stone Crab are the three most well-known landmarks in Miami. Other landmarks include the Miami sports stadiums comprising Marlins Park, Hard Rock Stadium, and the American Airlines Arena. The educational landmarks are Florida International University (FIU) and Miami Dade College.

What is Miami famous for?

Miami is one of South Florida's premier vacation destinations, with beaches, great weather, history, culture, sports, and entertainment. Downtown Miami, separated from the Atlantic Ocean by the Biscayne Bay and Miami Beach, is a modern metropolis and cultural treasure trove.

What are the best things to do in Miami?

Miami is famous across the globe for its glitz and glamor. Apart from just visiting the iconic Miami and South Beach, you can also shop from the Bayside Marketplace and explore Jungle Island.

What makes Miami so special?

The great beaches, amazing people, and beautiful wildlife are what make Miami one of the best cities in the United States.

What is the best time to go to Miami?

Spring is the best time to visit Miami. During the period from February to May, Miami has warm weather and lower crowds. There are also no hurricanes to worry about.

What should I do while the movers in Miami are moving my equipment?

You should finish packing. Unless you have contracted the moving company in Miami to perform packing services for you, packing is a job that you have to do yourself. You can also strip the bed, unplug your phone and other electronics, remove any excess items, label boxes, and measure furniture and doorways. Ideally, these activities should be performed before the moving company arrives.

Do movers in Miami charge by weight?

This depends on whether you are moving local or long-distance. Most local moving companies in Miami don’t exclusively charge by weight or volume. Long-distance movers will charge by the weight of goods, the distance those goods are traveling, and any additional or accessorial charges that may occur. Every moving company is different, so be sure to read and understand their terms and conditions.

How can I check the genuineness, credibility, and authenticity of movers in Miami?

If you wish to use a legitimate and reliable moving company in Miami, then you must thoroughly verify them. To check their credibility, visit their website, read reviews, check their licenses and certifications, and get opinions from friends or neighbors who have used the moving company. A platform like iMoving helps by offering information about the top movers in Miami.